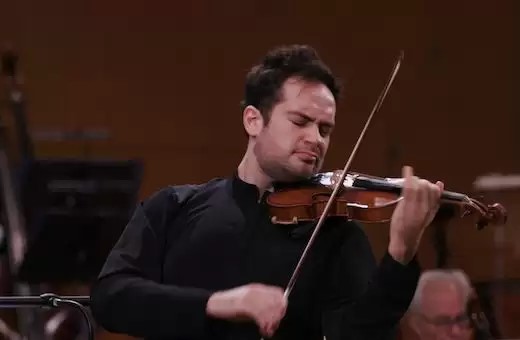 I first heard violinist Marc Bouchkov at the 2013 Montreal International Musical Competition, when he took with First Prize with Tchaikovsky […] Bouchkov brought the same virtuosity, charisma, and control to his Sibelius with the unmasked Munich Philharmonic, responsive as a chamber orchestra despite the social distancing. Philippe Jordan set a precise pulse that connected at once with the orchestra so that they took it over as their own. And Bouchkov responded to the rustling energy of the strings with long, stretching phrases as if he were in awe of the size of the music’s construction and as he anticipated its emotion. His playing recalled [.] the incomparable Ivry Gitlis, with whom he worked in 2007, every note pregnant with emotion, every run a thrilling adventure.
[.] Bouchkov drew forth dark rich tones from his instrument and wielded them with a wide range of color. He played passionately, fiercely, at times tearing at the music’s fabric, deconstructing familiar 16th-note patterns as if they were Bach for solo violin, and taking moments of serenity more seriously than sweetly. With Jordan’s close attention and the orchestra’s sense of collaboration, it was an exceptionally powerful performance that focused on the music’s sweep and majesty.